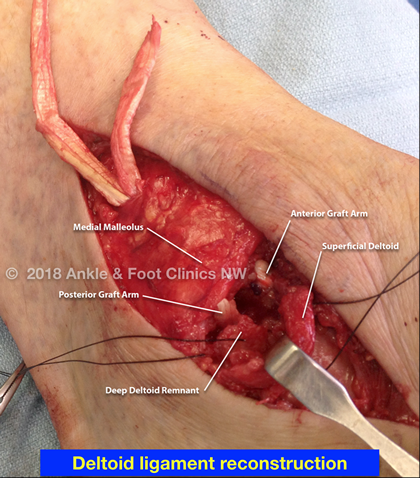 I ndividuals that suffer from ankle instability, a untrusting feeling that the ankle will roll when stepping on any irrigular surface, are candidates for ankle ligament reconstruction.

Which ankle ligaments are most commonly involved?

Ligaments on the outside of the ankle are most commonly damaged from ankle sprains. There are three anatomic ligament bands that can be damaged. If the damage is severe, the ankle bone (talus) can shift in the ankle socket producing a feeling of instability. Ligaments can be intact but loose of damaged beyond repair. Other ligament locations are between the leg bones (syndesmosis) and on the inside of the ankle (deltoid ligaments). High energy injury mechanisms are typically needed to injury these ligaments.

How is a loose or elongated ankle ligament repaired?

Is it possible to do surgery to treat ankle ligaments that are damaged beyond repair?

Yes, new ligaments can be reconstructed with the use of a tendon graft (usually made from a tendon allograft obtained from a tissue bank. Bone anchors are used to place the tendon graft at locations where the ligaments use to attach. The tendon graft after heeling then starts to function as a ligament and stability is returned to the ankle. In time cells called fibroblasts from the recipient enter the graft to maintain and repair the tissue.

Can the deltoid ligaments be reconstructed?

In many cases yes, but this is the most difficult of the situations. Usually the is colateral damage to other structures of the foot at the point when the deltoid ligaments fail.

How involved is ankle ligament reconstruction?

The surgery typcially takes 1-1.5 hours to perform depending on the complexity of the repair. It requires working in an operating room and is done as a day surgery.

What is the recovery?

Usually it requires a period of cast immobilization for 6 weeks part or all of the time non-weightbearing.